With the approaching August 17 deadline to reach an agreement for the South Sudan Crisis, Minister of Information Michael Makuei told reporters late Wednesday, after a week of talks in Ethiopia “There are some outstanding areas where, if we don’t agree, we don’t need to deceive ourselves and talk of peace“. Power sharing, allocation of oil-revenue and issues related to Federalism and re-integration of armies from warring factions remain unresolved. Should we then expect the start of peace or another stalemate in the cycle of violence that erupted in South Sudan since December 2013? 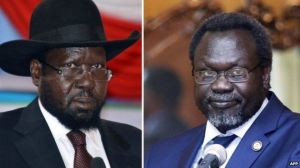 When South Sudan’s short-lived joy for independence ended, the New Country plunged into internal war on December 15 2013 following a power struggle between Vice President Dr Riek Machar and President Salvar Kiir. The war quickly spiralled from Juba, the Capital to other states’ and their captures of capitals of Jonglei (Bor), Upper Nile (Malakal) and Unity (Bentiu) which have changed hands from the rebel-led Sudan People’s Liberation Army in Opposition (SPLA-IO) headed by, the former Vice President Riek Machar to the Government of South Sudan (GoSS) led by President Salvar Kiir. 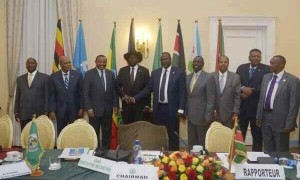 The conflict has been dragging on for 20 months now, and the several rounds of support from IGAD-led mediation did not strike a deal between the antagonizing parties. However, the IGAD-led mediation transformed itself into IGAD-PLUS comprising of the United Nations(UN), African Union (AU), the Trioka trio of the USA, the United Kingdom (UK) and Norway, the European Union, China as well as five African countries of Algeria, Nigeria, South Africa, Chad and Rwanda. With no clear solutions in sight, the IGAD-PLUS “served” the fighting parties with a compromise agreement with an overtone of a “take it or leave it” as is the only chance for Salvar Kiir and Dr Riek Machar to end the conflict. Yet both personalities have canvassed their positions that have mirrored personality indifference and negative body chemistry that emits bitter dislikes of one another, making references the historical indifferences that continue to debar them from reaching a peaceful settlement. 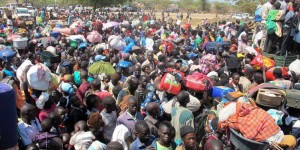 Having followed the deadlocks and disregards to heed to regional calls to end the conflict and reach a peaceful agreement, the international communities have expressed fatigue, impatience and dire concerns for the immense humanitarian crisis in the country.  Since the outbreak of the conflict 10 000 people have been killed, 700 000 refugees left the country and more than one million have been internally displaced. These have resulted to the mounting pressures on both parties. Yet, hostilities continue and some senior commanders from both sides have been sanctioned with more threat of sanctions issued by the USA, the EU and UN.

As the August 17, 2015 deadline to reach a Compromise Agreement (CA) draws closer, pushing for Salvar Kiir and Dr Riek Machar to end their political and ethnic indifferences, the question remains as to what options are left. There are enormous expectations from the South Sudanese parties to heed to the CA by this dateline, but it is extremely unclear what to expect from whatever outcome the compromise agreement might bring. The dilemmas, refuting and refusing to accept the nature of the content of the CA; suspicion, mistrust, and support from Uganda are limiting factors to agree to CA. These have also brought the irony of political travesty that seem to make political solutions to the conflict improbable. There seem to be an imported and unexpectedly convulsed political animosities from the internal historically embedded conflict and hatred the SPLA/M have had into and by IGAD-led and IGAD-PLUS peace process. With all these animosities that have been brought into peace negotiations the options have been significantly minimized. Nonetheless, some options can be analyzed:

Option 1: The irony of South Sudan political travesty may be reached by a win-win (50/50) chance. This option, which has been exercised at the level of allowing IGAD to bring the antagonizing parties to reach a negotiated peace agreement, is “compromised” in the draft agreement. This option has gathered opportunities from the various phases of the peace talks, and now resting on the plight of the deliverance of the IGAD-PLUS to make the parties agree. This chance is slipping by as recent news attests to the factionalization of the SPLM-IO.

Option 2: To work with the status quo scenario, meaning maintaining and strengthening the role of the President Salva Kiir in his presidential position and re-enforcing viable solutions around his leadership will allow the current government to go. This is also what Ugandan Government is providing using their UPDF to Salvar Kiir. This means that protestors and SPLM-IO will have to accept to support their leader whether weak or not and accept the role Uganda is playing. This chance is nowhere in sight now.

Option 3: Give war a chance. This is the worst option in terms of undertaking war until the winner emerges with victory – victor’s peace. This unthinkable option is mainly being observed on the ground where war has continued and killings of immeasurable scale are still raging. The winner takes it all has several shortfalls, but in reality, the war is taking place.

Option 4: Consider Salva Kiir and Riek Machar as undesirable and unsuitable to take up the leadership of the young nation, considering the personal hatred they have. Their previous attempts to work together have been damaged and squandered and the impossibilities of working together again are suspected will resume war. This would lead us into the next option five.

Option 5: Allow the international community to form a lean government that will be led by experts for a certain period while stabilization programmes takes centre stage of making governance work. This option may mean that the entire South Sudanese people have failed to realize the benefits of their 35 years of struggle to get independence and that all has lost meaning.

Option 6: A combination of some of the five options, which would also try to follow what the compromise agreement is about when August 17th 2015 passes, the concoction of governance will not have been clearly discovered. Anything from seeing an internal coup d’ etat in South Sudan and cracks from within the SPLA-IO may not be ruled out. An option based on forming a unity government may be possible here. Federalism has also factored in the conflict, pitting Equatorians squarely in the governance issues.

Option 7: Mandate an external military to rely on peace enforcement by subduing either the opposing movement or fully empowering the government through the UN PSC support system.  This option may be demonstrated with the support of the government of South Sudan, AU and UN. This means that the initiative that Ugandan government, expanded to the AU and UN-PSC is improved and strengthened until all opposing sides realize that there is need to work together. This option is similar to the work of AMISOM in Somalia

*Dr. Sunday Okello (s.okello@ipss-addis.org) is an Assistant Professor and Senior Researcher at the Institute for Peace and Security Studies (IPSS), Addis Ababa University.All views expressed in the AfSol blog are solely the views of the authors and do not in any represent the views of the IPSS or APSP. For more information on AfSol Blog, please contact research@ipss-addis.org

2 thoughts on “August 17: Tipping Point for the South Sudan Crisis?”

This blog is managed by the Institute for Peace and Security Studies (IPSS) based in Addis Ababa, Ethiopia. The blog was created under the Africa Peace and Security Programme, a joint initiative between the IPSS and the African Union. Guest posts and comments are welcome, please refer to the editorial policy page above. For submissions, questions or concerns, please email research@ipss-addis.org